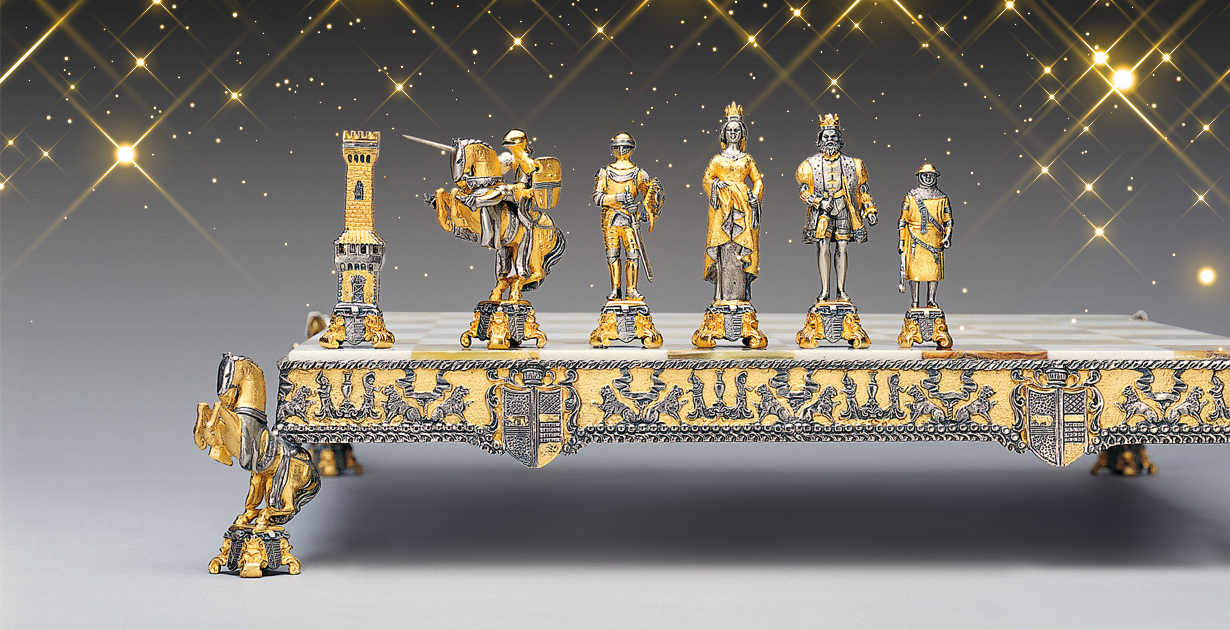 Board games and puzzles are a source of inspiration for jewelers around the world. Thanks to the luxurious frames made of the noble metal, the usual forms of recreation turn into works of art. Gold game sets become memorable gifts and elegant interior elements.

The most expensive simulator

The Japanese jewelry house has presented a simulation game made of gold of the highest finesses. Participants can select a character and begin his/her life path.

Games of such type were originally meant to be educational, as they taught players certain values. Participants progressed by moving to spaces with positive events and virtues: school and university studies, diligence, honesty, etc. It is not surprising that such a useful form of entertainment has been embodied in gold.

It took nearly four months to create the masterpiece. The field (50x60 cm) and all the details are handmade. To create the item, more than 12 kilograms of the yellow metal were needed. According to the manufacturers, this is the most expensive simulation game in history.

In the photo: Japanese board game made of gold.

American jewelers decided to embody the enduring popularity of one of the world’s most famous and beloved toys in the precious metal. Seemingly, they wanted to make the toy as durable and in demand as gold, highlighting its never-fading glory, so that it could shine like the noble metal in the sun. To mark the 40th anniversary of the Rubik’s Cube, the craftsmen made a life-size copy of the toy.

The cube is made of 18K (750 fineness) gold, its colored sides are adorned with diamonds, amethysts, emeralds and rubies. It is fully functional and can be solved if desired. In 2014, the precious toy was showcased in New Jersey, and later on, a global tour started, resulting in exhibitions around the world. Since it is a seven-year tour, the golden cube should return to the United States by 2021. 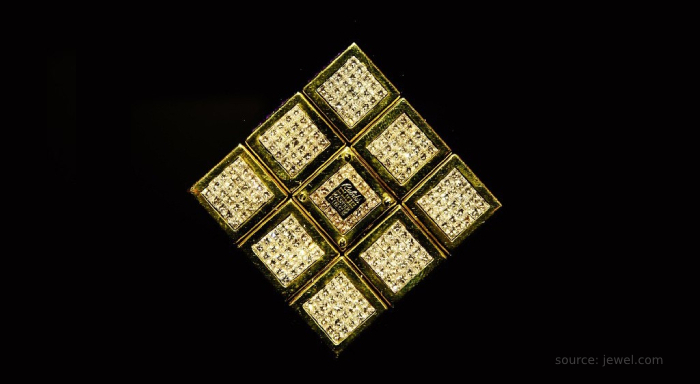 In the photo: golden Rubik’s Cube.

Lieb Manufaktur got inspired by dominoes. Their version of the game set features 28 dice in 18K gold adorned with diamonds. The treasure weighs 2.4 kilograms and is packed in a dark marble box that accentuates the sparkle of the golden dice.

Well-structured lines and right angles of dominoes represent a geometric expression of stability, logic and soft power. Gold also characterizes these properties, and the German craftsmen expressed them with impeccable clarity. The item is available in two variations: a complete set of 28 dice or a single gold souvenir as a sample. 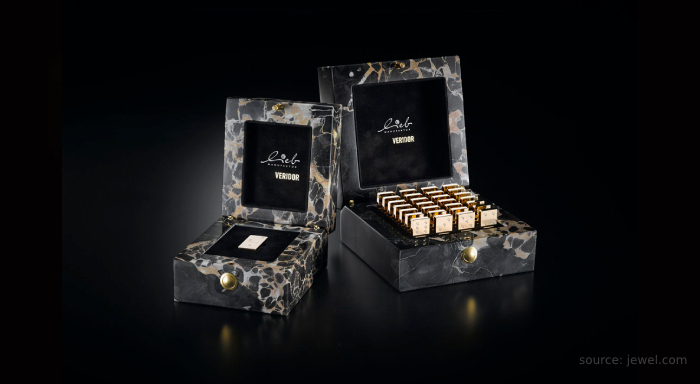 In the photo: a combination of simplicity, laconic forms of the domino dice shape and the nobility of the yellow metal resembles a gold bar.

Chess is a game of the mighty of the world, which has entrenched in the conscience of people as a symbol of wealth and power. Well, there is hardly a more suitable material in which it can embodied than the metal of kings, the source of power and luxury, namely gold.

House of Solid Gold has created a unique handmade chess set. The board and figures are made of gold and decorated with yellow and black diamonds. It took more than 4500 hours to create a masterpiece that demonstrates a noble “pedigree” of the game. 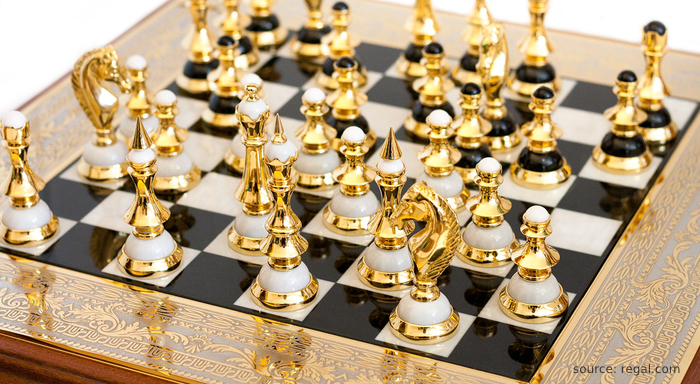 In the photo: the chess set, made of gold of the highest fineness, amazes with luxury and intricate details.

Gold adds exclusivity, symbolizing permanence, giving a profound meaning to games and bringing their symbolic essence to the fore. Chess personifies the power of kings in command of an army, while the legacy of the cube’s creator is immortalized in gold.

Over the years, not just the price, but also the importance of such precious games will increase, because the value of gold is timeless. The set, made of the noble metal, has every chance of becoming a real family heirloom that will be passed down from generation to generation. 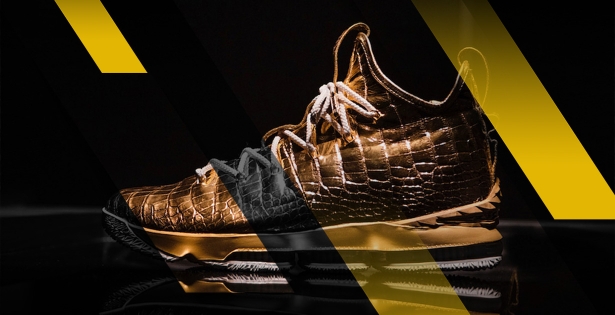 Golden footprints of the Fire Monkey 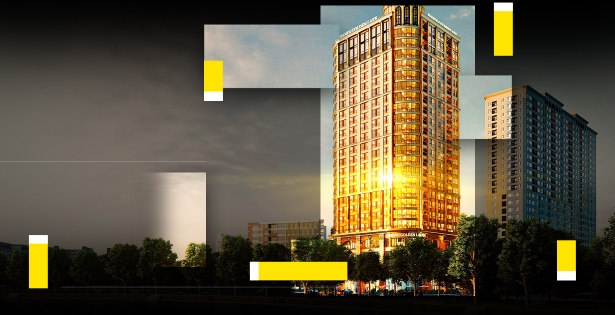 Hospitality of the highest fineness 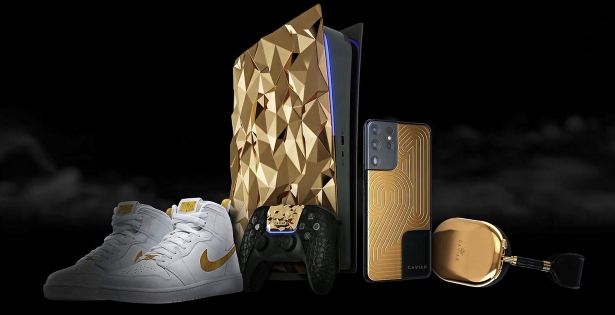