In 1700, King Philip V of Spain (Bourbon) came to the throne. At that time, the country's economy was going through rough times: the state debt increased, while the treasury needed to be replenished with treasures obtained by the Spanish conquerors of the New World. In addition to that, Philip V decided to marry, and the royal wedding, like any other occasion of such scale, required a lot of money. Gold shipped from Latin America should have been a salvation for the country.

In 1715, the Spanish treasury fleet, commanded by Admiral Juan Esteban de Ubilla, departed from the port of Seville to the shores of Mexico and Cuba. Eleven galleons were about to deliver gold from the mines of Peru and Colombia, gold bars from Mexico, as well as expensive fabrics, porcelain and ivory to Spain.

Ships safely reached the Mexican port Veracruz. For several weeks, galleons were loaded with gold and precious stones for the Spanish court. Then the armada arrived in Cuba, where eight chests filled with gold and gems were delivered to the main ship of the treasury fleet. Golden treasures were intended for King Philip V, who planned to present them as a wedding gift to his bride Duchess of Parma. 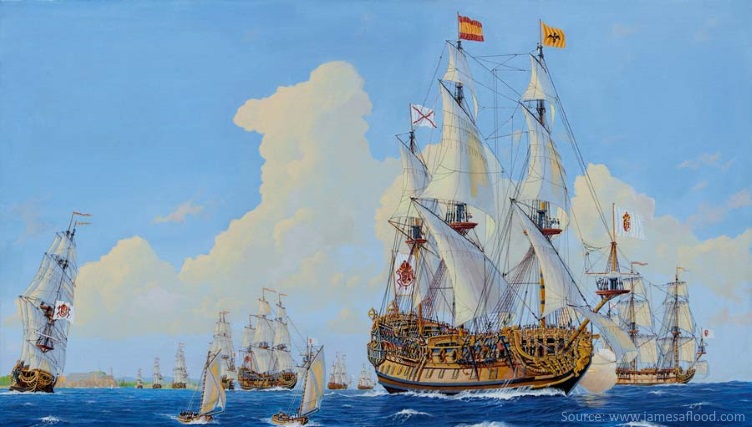 In the photo: at the end of July 1715, Spanish galleons were headed towards their native shores.

After five days of sailing off the coast of the Florida peninsula, the ships got into still waters. An ominous lull did not bode well for the fleet. The next day, a heavy storm broke out. A hurricane raged, big waves rose. Sailors began preparing lifeboats on several ships.

One of the captains decided to secede from the rest of the treasury fleet and head east, venturing further into the depths of the ocean. Such a decision saved the ship "Grifon" and its crew from death. The remaining ten ships that moved through the storm towards Florida sank the following day.

Out of 2,500 sailors, less than half stayed alive. The wreckage of the ships was scattered 30 miles along the eastern coast of the peninsula. The survivors were trying to find the chests of gold for several months. Spaniards hired local Indian divers to search for the riches of the sunken galleons, but frequent storms and hurricanes forced the sailors to desist from further attempts and give up on finding the golden treasure.

According to the documents archived in Seville, the Spaniards managed to find and lift nearly 30% of the precious cargo from the water within the following months. After four years, the country finally stopped searching for the sunken gold of the treasury fleet. For more than two centuries, the lost treasures of the Spanish court remained undiscovered. 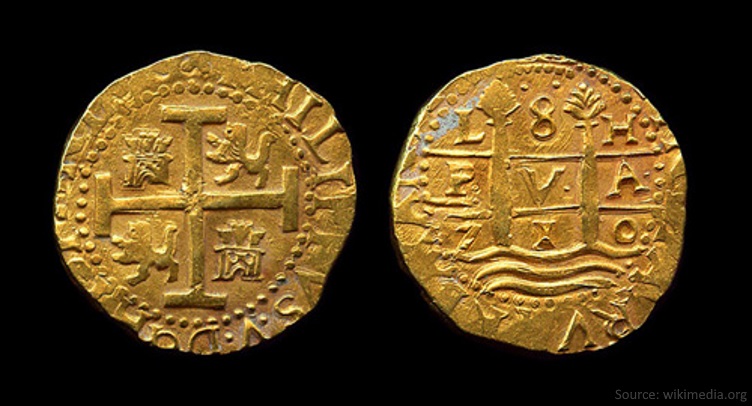 In the photo: Spanish gold coin.

Being intrigued by the valuable discovery, the man sent a request to the Spanish State Maritime Administration. He wanted to know more about the sunken ships that could transport precious cargo. He later received a package with copies of old documents from Seville, mentioning ten galleons of the treasury fleet that shipwrecked off the coast of Florida in 1715.

Wagner hired a team of treasure hunters, with whom he decided to explore the bottom of the eastern coast of the peninsula. At the crash site of the Spanish ships, Wagner and his crew discovered over 60,000 antique gold coins.

Other valuable items were also found at the bottom of the ocean: a golden whistle on a chain that belonged to the deceased Admiral Ubilla, disks made of gold and silver alloys weighing 150 pounds, golden utensils.

In the photo: among the valuables found there was a lot of jewelry accessories: golden crosses, medallions, chains and rings.

The total value of the discovered treasure is estimated at $1 million. Yet this is only a small fraction of golden items transported by the Spanish treasury fleet in 1715. During the storm, the sunken parts of the ships could be “washed” ten miles away. Enthusiasts and professional treasure hunters are searching for the gold of the Spanish galleons to this day.

Read also about the treasures of the sunken ship.